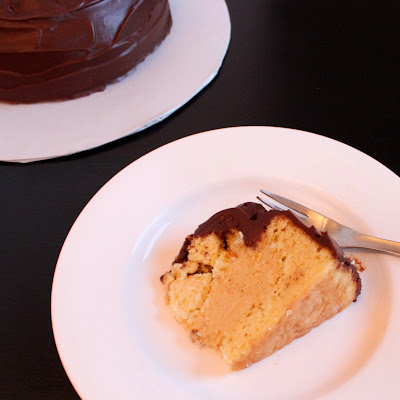 He asked for the same thing that I made last year, Chocolate Stout and Irish Cream Cupcakes, but how could I do the SAME thing again?!

Now, if you are wondering why the cake is all lumpy...well the inspiration was from Bobby Flay's competitor, Eunice Feller of Bread and Chocolate in Boston, MA. Instead of layering her Boston Cream Pie, she carves out the center of the cake and fills it with pastry cream, then tops it with the squared pieces of the hollowed out portion of cake. Pic here.

So, this was my attempt and it was most successful until the ganache set too much and it didn't exactly flow over the cake pieces, but more globbed everywhere. 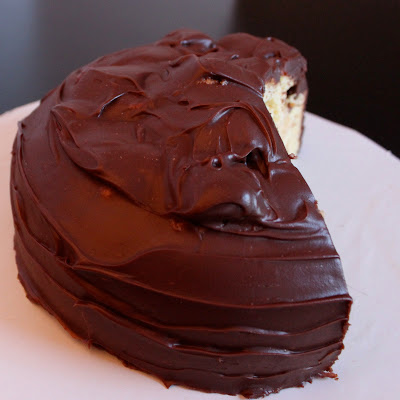 Well they can't all look perfect, but they sure can taste like it!

To prepare the cake,  preheat oven to 350 degrees. Grease the bottom and sides of an 8x3 inch round cake pan, then line the bottom with parchment paper. In a small bowl sift together the cake flour, all-purpose flour, baking powder, and salt; set aside. In a small saucepan over medium heat combine the butter and milk. Stir occasionally till the butter is melted and set aside.  Separate three egg whites into a large mixing bowl and combine the three egg yolks with the remaining two eggs in a separate small bowl, set aside. Using the whisk attachment, beat the egg whites on low until foamy. Increase the mixer speed to medium and add 6 tablespoons of sugar, one at a time. Continue mixing till shiny, soft peaks form. Move the egg white/sugar mixture to a new bowl. Now beat the egg yolks using the whisk attachment on medium speed adding the remaining 6 tablespoons of sugar, one at a time. Beat until the egg yolk mixture is very thick and a pale yellow color, about five minutes.


Combine the beaten egg whites with the beaten egg yolks, gently fold in the flour mixture. Once flour is no longer visible, pour melted butter mixture down one side of the bowl. Gently mix the batter till all butter is incorporated. Pour batter into prepared 8x3 pan and bake till cake is springy to the touch and a toothpick inserted in cake comes out clean, about 40-45 minutes. Immediately upon removing pan from oven, run a knife along the sides to loosen the cake. Let cool in pan for five minutes, then flip cake rounded side up onto a cooling rack. Let cool completely.


To prepare the pastry cream, combine the half and half with the irish cream, 6 tablespoons of sugar, and salt in a large saucepan. Over medium heat bring mixture to a simmer, stirring occasionally. In the mean time, combine egg yolks with remaining 2 tablespoons of sugar and whisk till sugar has dissolved, about 15 seconds. Whisk in the cornstarch, just until incorporated and mixture is a pale yellow, about 30 seconds. Return to cream mixture, once it has reached a simmer, slowly add to the prepared egg yolk mixture while whisking. Return entire mixture to saucepan over medium heat, while constantly whisking until it begins to simmer and mixture is thick and glossy. Remove from heat and whisk in butter and vanilla. Strain the pastry cream through a fine mesh sieve, pushing with a spatula moves it along faster, into a medium bowl. Cover pastry cream on surface and the bowl rim with plastic wrap and chill for a minimum of three hours, preferable overnight.


To prepare the ganache, combine heavy cream, irish cream, and corn syrup in a medium saucepan. Over medium heat, stirring occasionally, bring to a simmer. Remove from heat and pour the cream mixture over a bowl of the chopped chocolate, whisking constantly until the chocolate is melted and incorporated into the cream mixture. Let ganache cool slightly, stirring occasionally.


To prepare the cake, using a small knife, hollow out the top of the cake leaving a one-inch thick rim. Cut the trimmed cake into big chunks and set aside. Spoon the prepared pastry cream into the hollowed out cake and pile the chunked pieces on top. While the ganache is still warm, pour over the top of the cake and let pour down the sides. Let the cake rest for a few hours prior to serving.


As you can see, this cake is not a one day event. I split my preparations over three days not to overload myself and it worked out great. I was so excited when the pastry cream set properly! The first time I tried to make it, I wasn't watching the stove properly and my irish cream boiled over the top making a mess all over the kitchen. A trip to the liquor store later, I tried again following BrownEyedBaker's tutorial on how to make pastry cream and it worked!


I adapted the recipe from Annie's version of the Boston Creme Pie.


Also, I don't know how many urban adventure racers are out there, but for my hubbie's birthday we participated in the Great Urban Race in Houston and it was a total blast. The race goes to cities all across the US and offers some friendly family competition, so if you haven't heard about it yet, check it out! You can read all about it on my family blog: meetthekadlecs.blogspot.com.