so really it is a triple layer chocolate cream pie! 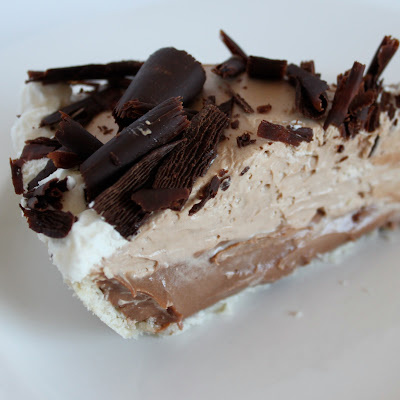 This is a perfect summer pie as it only requires you to use the oven for baking the crust, and when it is 100 degrees outside nobody in Texas wants to use their oven! Warning: this pie is a long pie project, read the instructions before starting. I did not. I took one look at the recipe and started working at 7pm hoping for a nice Saturday night dessert. Four hours later I had skipped multiple "wait and refrigerate" steps and just threw everything in the pie let it sit in the fridge as long as I could, 30 minutes, and dove in. The pie rocks, but having to work at 7am the next morning didn't. Luckily I had a nice refrigerated pie to come home to and it was even better than it tasted the night before. 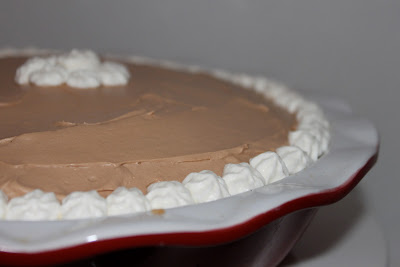 I thought originally that this pie might be even better than it already is if I used a chocolate cookie crust, but my husband said "that would be complete oreo domination!". He's funny sometimes and this time he was right, a cookie crust would be total "oreo domination".

So without further ado...the best chocolate cream pie I have EVER had:

Double Layer Chocolate Pie
Pie Crust:
1 cup all-purpose flour
1/2 tsp salt
1/3 cup vegetable shortening
1/2 tbsp unsalted butter
2 tbsp ice water
Filling:
4 ounces 60% bittersweet chocolate
8 ounces cream cheese, softened
1 and 1/2 cup heavy whipping cream
1 and 1/2 cup confectioners' sugar
4 ounces milk chocolate
1 package (3.4 ounces) instant vanilla pudding mix
1 and 1/4 cup whole milk
Topping:
1/2 cup cold heavy whipping cream
2 tsp confections' sugar
2 ounces 60% bittersweet chocolate
For the pie crust, in a large mixing bowl stir together flour and salt. Using a pastry cutter or two forks, cut in butter and shortening until the mixture is the consistency of small peas. Sprinkle the ice water and mix until the dough starts coming together. Using your hands, work the dough into a 4-inch disk, wrap and refrigerate for 1 hour (or freeze at this point). Roll-out dough onto a lightly floured surface to form a disk 1-inch larger than your pie size and 1/8-inch thick. Place the dough into pie pan and refrigerate for 15 minutes. Preheat oven to 450 degrees. After pie dough has chilled prick the bottom and sides gently using a fork to prevent the crust from bubbling or use pie weights. Bake for 8-10 minutes or until golden brown. Cool on rack.
For filling, melt the bittersweet chocolate in a double broiler or in a bowl over simmering water, stir, and set aside. In a medium bowl beat the cream cheese on high for one minute. Add 1/2 cup heavy cream and confectioners' sugar and beat on high for one minute. Stir in melted chocolate and mix till blended. Pour mixture into cooled pie shell and chill for one hour. Meanwhile, melt the milk chocolate in a double broiler or in a bowl over simmering water, stir, and set aside. In a large mixing bowl combine the pudding mix and whole milk, beat on low until blended, then on high for two minutes. Add in melted milk chocolate and beat on high for one minute. Set aside. In a small mixing bowl, whip one cup heavy cream until soft peaks form. Fold the whipped cream into the milk chocolate mixture and spread over the first cream cheese layer in the pie crust. Chill for 2 hours.
For the sweetened whipped cream, beat the remaining heavy cream and confectioners' sugar till soft peaks form. Fill a pastry bag with the whipped cream and decorate pie as desired. For the chocolate curls, melt chocolate in double broiler or in a bowl over simmering water. Pour over a chilled smooth surface, I used a cutting board, but a marble slab is recommended (who has that!?). Smooth chocolate to a thin layer and chill for 5-10 minutes or until chocolate is no longer melted, but soft. Using a metal spatula scrap across the chocolate until a curl is formed. Remove curl from board using a toothpick and place onto dessert or chilled plate. 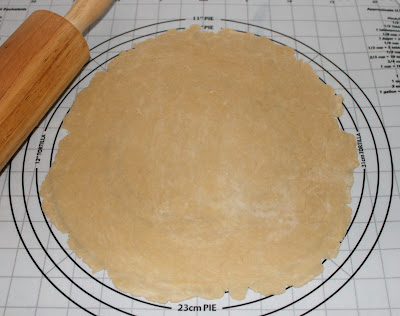 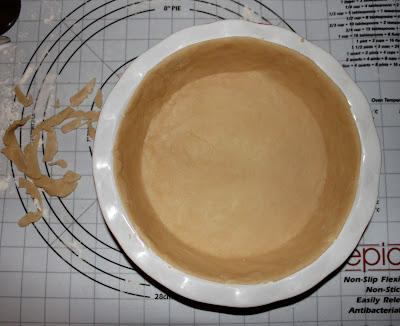 I am still not a pro at making pie crust, I restarted once this time and it still was not perfect. I think that the saying "practice makes perfect" was meant for making pie crusts! On the other hand, this was my first time trying to make chocolate curls and I think it went well!. I had chilled the chocolate too long in the beginning and had to wait for it to soften, but the warmer the chocolate got the easier the curls formed. 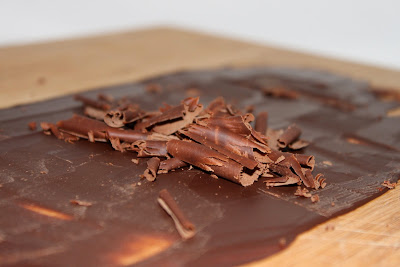 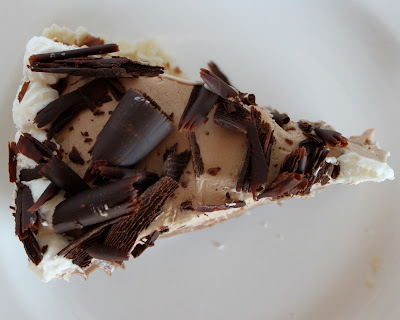 We can all thank the good chocolate people at Ghirardelli for this recipe in their Ghirardelli Chocolate Cookbook.
Enjoy!