Do you need some spice in your life? Have you been craving good Tex-Mex? Well then come on down, or just keep reading! 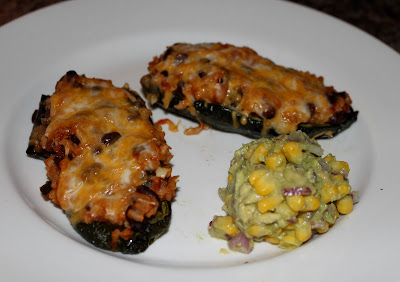 This recipe involves a bit of prep time, so if you have someone that you can recruit as your sous chef make whatever agreements you have to, because there is a lot of dicing! It is all worth it in the end, the flavors in the dish really stand out and make you proud of all the hard work you put into it. Isn't that what it is all about?

This recipe is courtesy of Ashlee at A Year in the Kitchen. She is wonderful and has really introduced some new flavors into my meal plans. I was a little nervous at first never having poblano peppers before, but they were the perfect amount of spice. My husband didn't even realize this was a vegetarian dish till I told him how healthy it was! He then of course recommended we add some beef or shredded chicken next time, sigh.

Preheat oven to 400 degrees. In a 9x13 baking dish place 3 peppers, cut-half facing up, and bake while preparing rice and bean filling. In a large sauce pot over medium heat combine extra-virgin olive oil, diced peppers and onion, and minced garlic. Saute till vegetables are softened then, add chicken stock, tomatoes, and spices and bring to a boil. Once boiling add rice and bring back to a boil. Once boiling again set heat to low, cover pot, and simmer for 15 minutes. Remove peppers from oven, stir black beans in with rice mixture and spoon into peppers. Sprinkle cheese over each pepper and bake for 10 minutes.

For salad, combine juice and grated zest of lime, diced red onion, corn, cilantro, and salt and pepper. Add in chunked avocado and chill till peppers are ready. 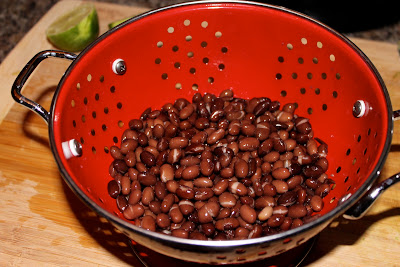 I used four poblano peppers in this recipe, one diced and three to stuff. I would recommend an additional pepper for stuffing, unless your poblanos are jumbo size, because the filling was just overloading my peppers. It may look nicer when plated as well. 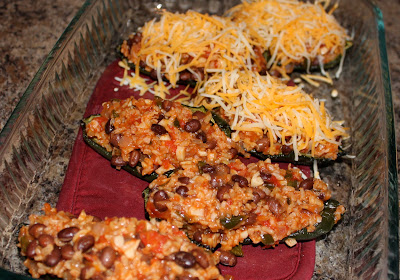 The avocado and corn salad really complement the spicy flavors in the pepper dish making this a great hot summer dish. If you have time, I would recommend roasting or grilling the corn and cooling it prior to mixing with the avocado. 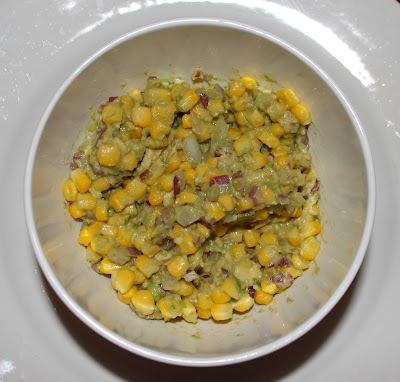 Next up on my Tex-Mex list are homemade enchiladas, anyone have a good sauce recipe?