My husband and I went to New York last weekend for vacation. We lived in New York for a small time and have really yearned for the variety of good food all over the city. Don't get me wrong, I have had some great Mexican since moving to Texas, but the Italian doesn't compare. The trip was a surprise for my husband's birthday, but I had a small cupcake agenda of my own.

I had a list of cupcake places in my head and we made it to a total of four places, not to mention the wonderful brunch we had at Sarabeth's West and ice cream sundaes at Serendipity 3. First up for cupcakes was Butter Lane, which we hit after going to eat some yummy polish food. We ordered the "Elvis" and an espresso cupcake which was a chocolate cupcake with espresso icing. The Elvis was my favorite cupcake for the trip, it is a banana cupcake with a peanut butter frosting topped with mini-marshmallows. The cupcake was so fresh and simple, you could tell they weren't lying about farm fresh eggs and butter. As soon as you walk in the store you can smell the sugar and can watch them icing cupcakes in the back. 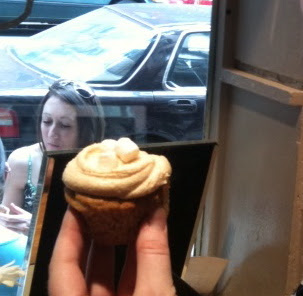 Crumbs My husband's favorite cupcake was their Grasshopper, it was a close first for me too! Their cupcakes were a bit bigger than your normal cupcake size, they even had a Jumbo sized cupcake that looked more like a cake! I have to say that it was hard to decide what to order here because everything looked amazing and tempted my taste buds. The Grasshopper is a chocolate cupcake with chocolate fudge filling and mint cream cheese icing rimmed with mini chocolate chips. I had the Baba Booey which is a chocolate cupcake filled with peanut butter icing and topped with a chocolate cream cheese and peanut butter frosting rimmed with mini peanut butter chips. Like I said the Grasshopper was great, same with the Baba Booey, the cake was fresh and the flavor pairings were perfect. If you are an icing hound, there was an ample amount on both cupcakes. Sorry for the lack of pics here, guess we were too excited to stop and photograph!

Eleni's  I hadn't heard of this beautiful cupcake and cookie stop, but found it while shopping around Chelsea Market. We ordered the Reese's and Chocolate Ganache cupcakes and grabbed some fresh milk from Ronnybrook Dairy a few stores down. The Reese's cupcake inspired me to make them at home, it was a chocolate cupcake with peanut butter frosting, but it had Reese's Peanut Butter cup broken up in and on top of the cupcake, yum! The chocolate ganache cupcake was a chocolate cupcake with a ganache filling and a dark chocolate icing. I am glad we got the milk, because the cake in both cupcakes were a little stale, but the icing was the creamiest for the trip and the ganache was a super rich chocolate! The store specializes in beautifully decorated sugar cookies, which I regret we didn't try so I guess we will have to go back! 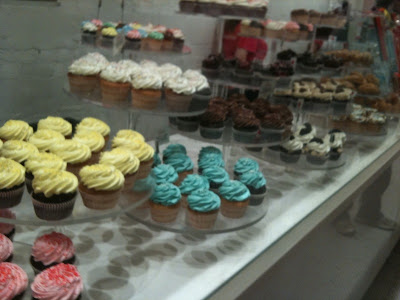 Magnolia Bakery This was my least favorite stop, I was disappointed after all the hype I had heard. We did go to the Rockefeller Center location (maybe we should have taken the trip to the downtown location) and there was a line around the building. I didn't mind waiting and chatting with the other cupcake goers in line, but as we entered the door we were rushed to order, pay, and get pushed right back out the door. We ordered a classic red velvet with cream cheese icing and a chocolate fudge cupcake with a cream filling and ganache frosting (like a hostess). The cupcakes were yummy, but nothing special that I couldn't make at home.
With that, I am in no way a cupcake or culinary expert, just someone that enjoys good quality food! What other places have you been in New York that you would like to share?